For the 6th consecutive year, True Source earned its place on the Minneapolis/St. Paul Business Journal’s List of the Top 25 Executive Search Firm in the Twin Cities! 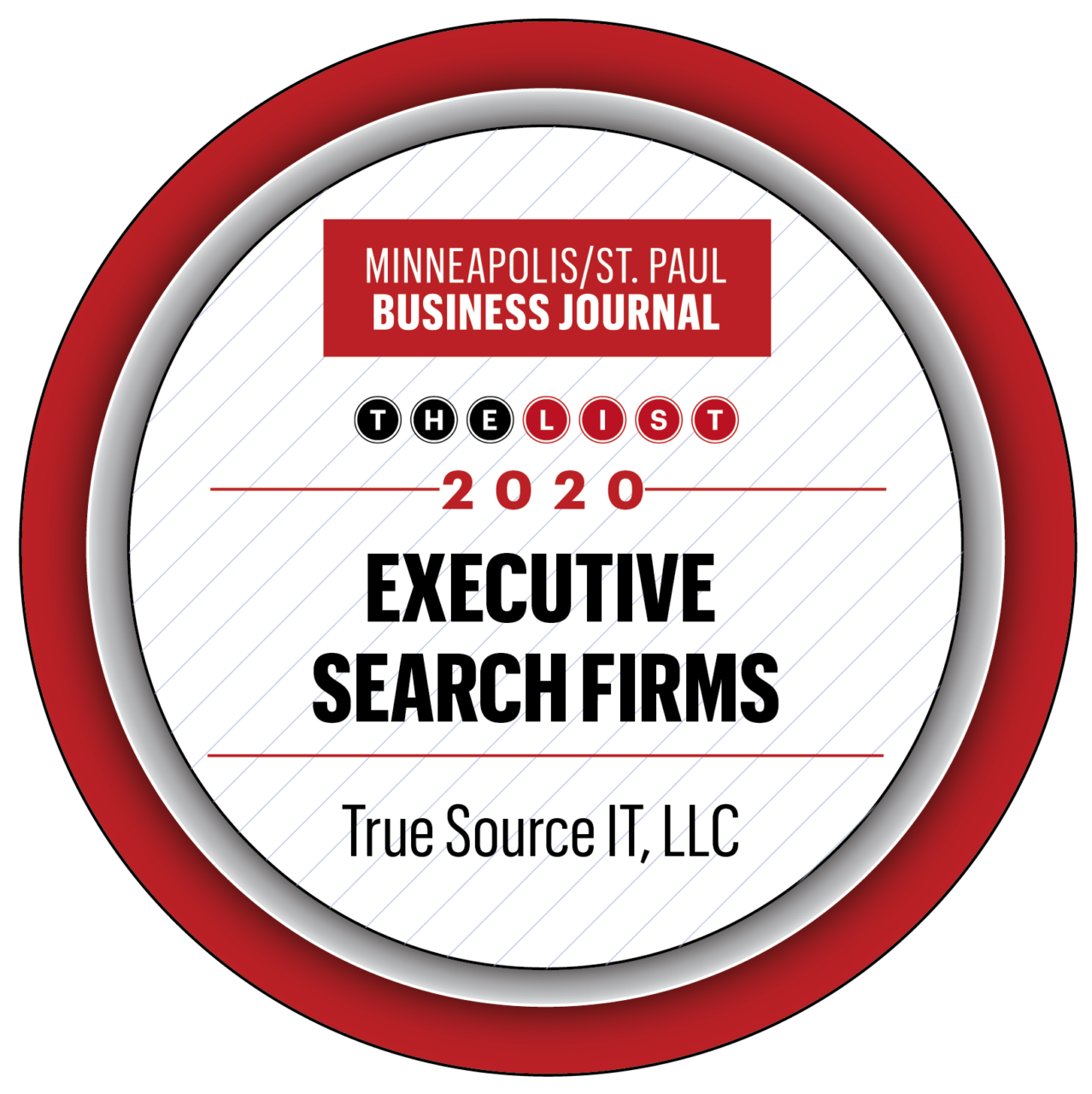 For the third time, we’re excited to announce True Source made the 2020 #Inc5000 list for fastest growing private companies! See our rank and the full list here:  inc.com/inc5000 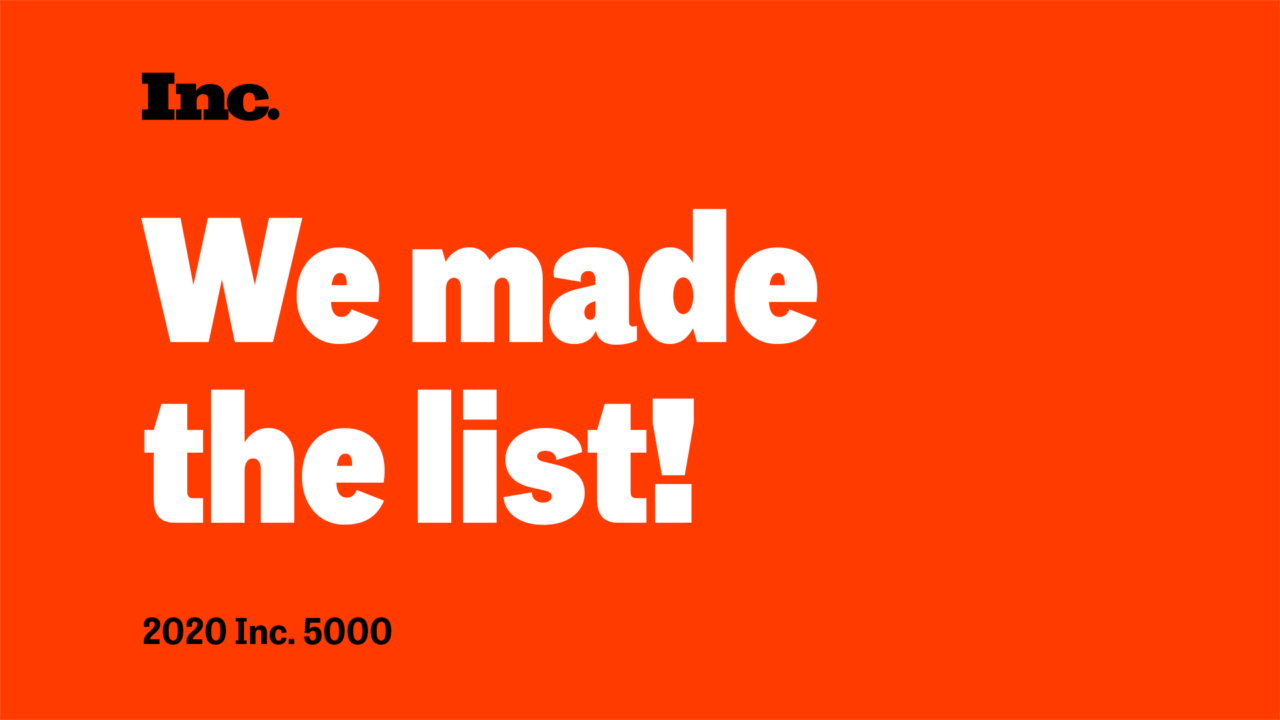 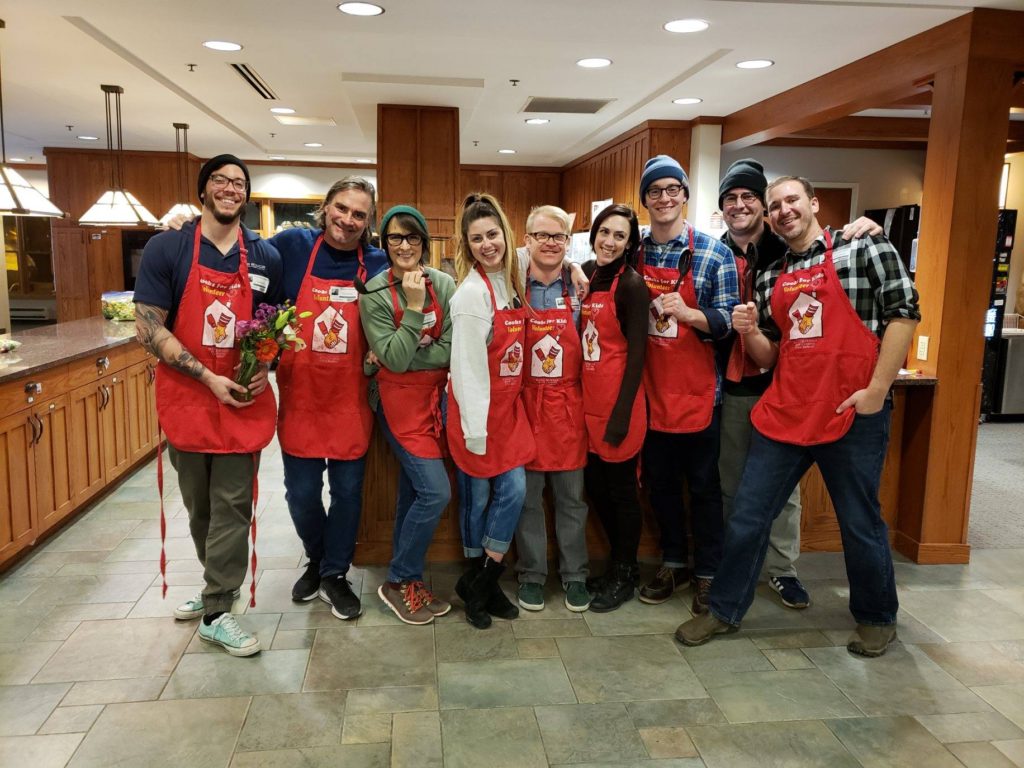 Last night we had the pleasure of preparing dinner for residents at the Ronald McDonald house. Not only was it our honor to serve them, but it was our privilege to talk with them and listen to their stories of love, hope and courage.

Gartner predicts that IT staff will have fewer technical roles available to them as the cloud gains traction. That’s just not true.

According to Gartner, by 2021, 40 percent of IT staff will be “versatilists,” holding multiple roles. Moreover, most of these roles will be business-related, rather than technology-related, it predicts.

I agree with Gartner that this versatilist shift is real. Cloud computing is a big reason why. The force of cloud computing is indeed changing how you staff IT; indeed, I’m seeing more people in cloud-enabled IT organizations who have more than one job.

However, if you think this mean that things will become less technical, you’re in for a bit of a surprise by 2021. In fact, they will be much more technical.

There are a two major trends that I’m seeing in enterprises adopting the cloud for a significant portion of their infrastructure:

The shift to the cloud is causing a duality of skills

As a result, they have moved from one role to two roles, or even more roles. However, the intention is that eventually that the traditional systems will go away completely, and they will just be focused on the cloud-based systems. I agree with Gartner on that, too.

The cloud shift is putting more focus on technology, not less

While I understand where Gartner is coming from, the more automation that sits between us and the latest technology means we need more technology specialists, not less. So, I’m not convinced that IT versatilists will gain new business roles to replace the loss of of the traditional datacenter roles, as Gartner suggests will happen.

I’ve never seen a machine learning system that designs and builds its own learning model, an IoT system that sets up data integration on its own, nor a cloud monitor and manage itself.   Thus, highly skilled and technical people will still run the show.

There’s nothing wrong with IT specialists taking on business roles—in fact, that’s often a good thing. I just don’t believe that IT pros will need to do so because the need for technology skills will be reduced. There’ll actually be more demand for technology skills, just not the same ones we have today. 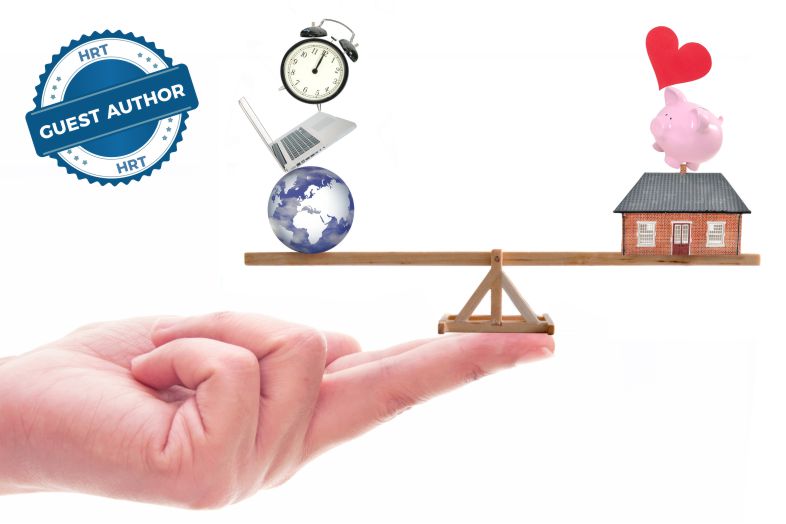 Abhijit Tamhane is the vice president of product management and technology leader at HackerRank, where he’s on a mission to build amazing products that match every developer to the right job. Prior to that, he built and launched the first version of Tringo (Android), an international calling app. He’s also built and grown technology teams at Target and Salesforce.

Software development has changed drastically in the past decade. Today the world around us has evolved to include more software contact per person, per day than at any time in our history. Abhijit Tamhane, VP of Product Management at HackerRank, shares what tech professionals look for in a job today

As the demand for software engineers has spiked, there’s been a shift in power between the recruiter and candidate relationship. Given the growing competition for top talent, skilled developers today can be selective of the jobs they choose.

This means hiring managers and recruiters need to have a deeper understanding of what developers are interested in, how they learn, what motivates them and what they look for in a job so that they can attract technical talent. To surface, analyze and share information on the changing landscape of software development, we just launched our first ever survey of more than 3.2 million developers that are part of the HackerRank community to hone their skills. You can read the full report here. Over 39,000 developers responded, and their intimations show just how big of a gap there is today between what developers want and what hiring managers tout on their careers pages and job descriptions. The best hiring managers and recruiters today will refocus their strategy to truly understand the developer community.
Work-Life Balance & Learning Beats Perks 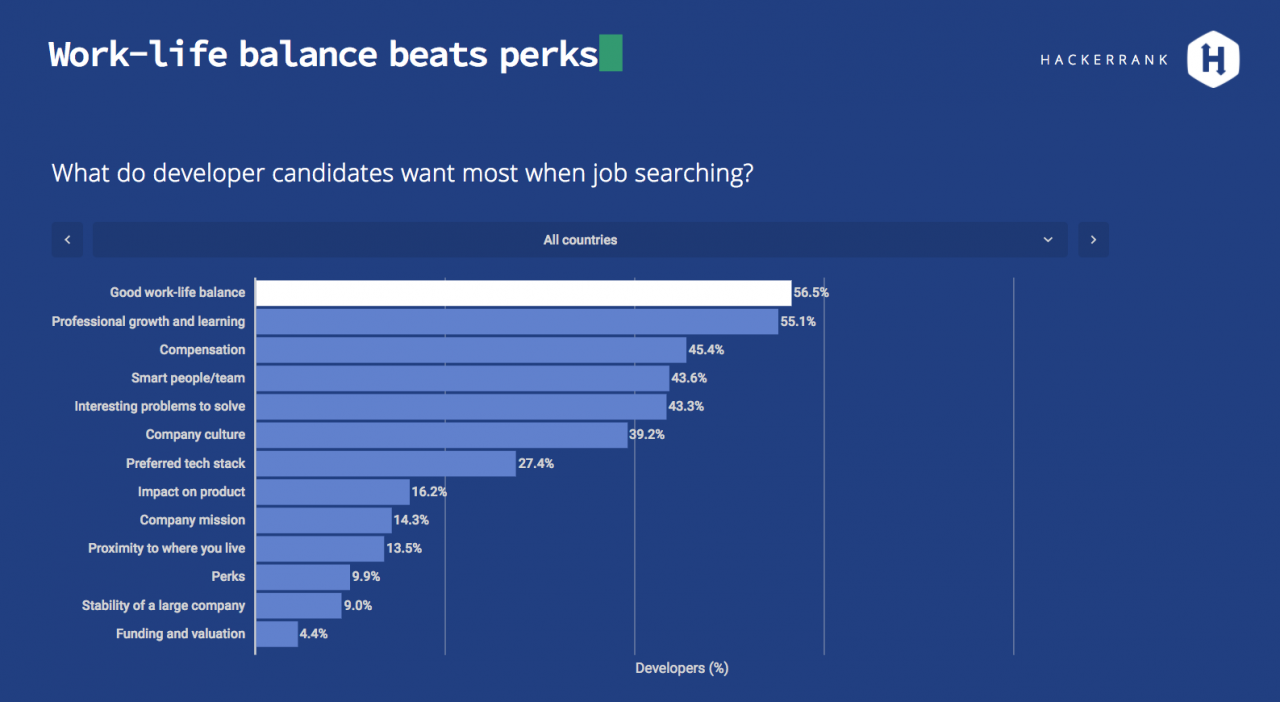 If you want to win developer talent today, the best hiring managers will communicate two things: Flexible work schedules and ability to grow and learn . Developers value these more than perks, stock options, and company’s mission statements, which, these days, are expected as part of any technology job. If you really want to stand out, focusing on the flexibility of your startup would help you win tech talent.

Of course, work-life balance can mean different things to different people. So, we dug deeper and followed up with developers on what this really means. It turns out, developers crave a flexible work schedule, ability to work remotely, and love employers who value output as opposed to the number of hours worked. 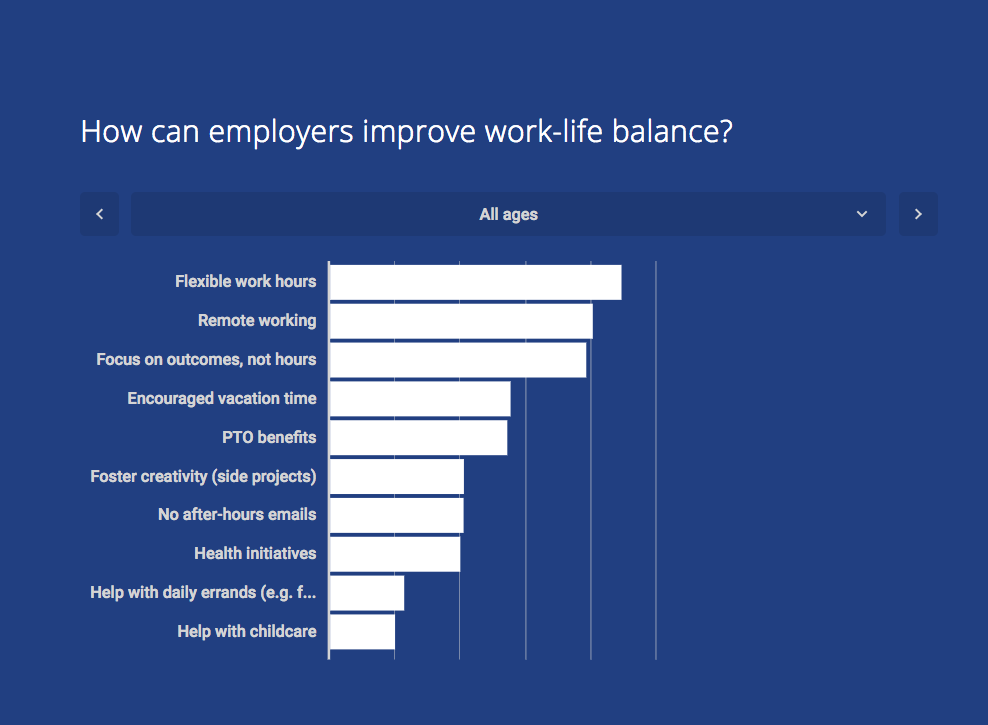 Developers deprioritized help with daily errands (like onsite laundry) and health initiatives for flexible work hours. Ultimately, developers want to work at a place where they can learn new skills, take on new challenges, and solve new problems. So, be sure to give them those opportunities if you want to not only attract them but also keep them on board.

Developers are Not Their Resumes

One of the most important business lessons to grasp about our survey is that developers are not their resumes. Traditionally, hiring and HR work has been about keywords. Our survey reveals that hiring managers, more often than not, care about experience and accomplishments as opposed to education, training certificates, and skill endorsements. 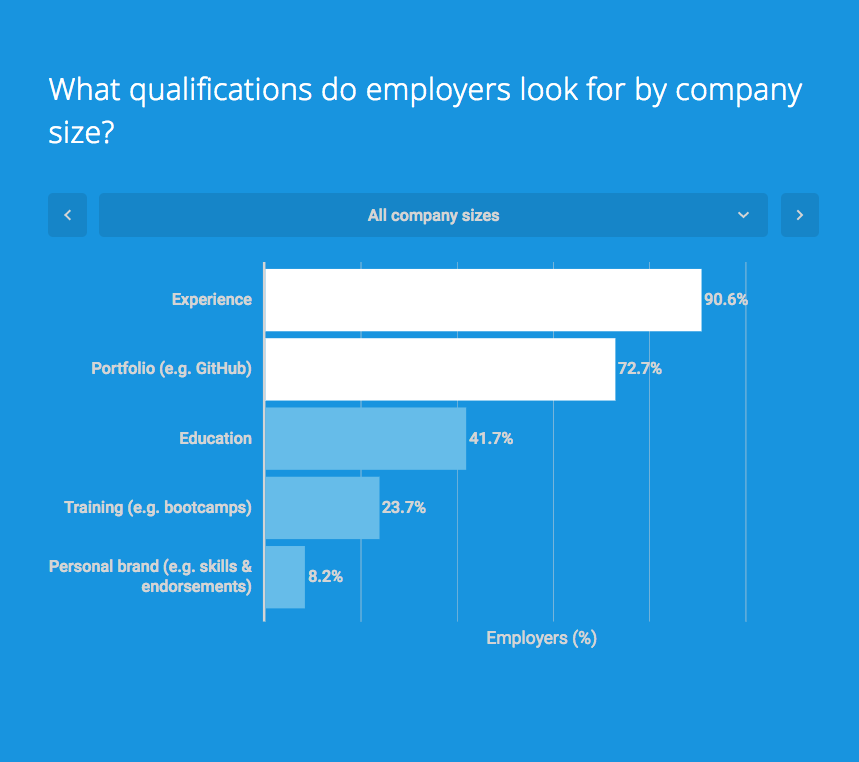 Hiring managers or recruiters take thousands of resumes and remove all of those that do not include the desired keywords. It’s the only way today to parse through high volumes of resumes. They then go about the difficult task of assessing the skills of those remaining developers, something that is almost impossible to do reliably at scale without outside help. When asked what the biggest hiring challenge is, the same hiring managers said assessing skill is their number one problem — as opposed to lack of talent. Meanwhile, only 55% of developers said resumes were a good reflection of their abilities.

In the end, all of this work is largely ignored by the top level executives in the hiring process, anyway. It turns out that the sharpest C-levels, founders, and VPs in the industry are not hiring through resumes, they’re hiring through GitHub . As a storage of real-world projects, GitHub means more to these executives than a resume or even experience. Now, this could very easily be because C-levels and their ilk typically receive a pre-screened set of resumes, but even if this is the case, this means proven skill and contributions are more meaningful than perfecting the resume.

To Sum it All Up

As the competition for technical talent grows in an increasingly software-centric world, it’s going to be more important than ever for recruiters to rethink the traditional attraction and retention strategy. The more companies build a talent brand that’s specific to developers, the more they’ll be able to differentiate themselves.

As more companies outside of Silicon Valley hire software engineers and data scientists, the tech landscape is fragmenting. Yet there remains a set of versatile programming skills that are widely sought out by employers, and for current and aspiring technologists, knowing what those are can help you advance in your career.

Job search engine Indeed compiled a list of the top tech skills employers are hiring for. It analyzed hundreds of thousands of job postings published over the past several months and ranked them by how often they showed up in job descriptions for tech roles.

Programming language Java ranks first, appearing in 30% of tech job descriptions. Silicon Valley company Sun Microsystems first released Java in 1995. Four years prior, a group of engineers started building Java as a tool for the cable TV industry, but it turned out to be much better suited for the Internet. Today’s engineers have used Java to build everything from Gmail to Hadoop, a program for analyzing vast quantities of data. Java can also be used to build mobile apps, business operations systems and scientific tools.

Agile, a conceptual approach to software development, ranks second among the most in-demand tech skills. It shows up in 27% of tech role descriptions. Agile entails breaking down a software development project into pieces and addressing each one in short programming cycles, such as one or two weeks. It guides engineers to build new product features one at a time and release them, instead of taking the time to build a more complex product and waiting months to launch. With agile, teams can observe how users react and gain valuable insights more quickly, allowing them to be more flexible to end users’ wants and needs. Agile has strong ties to the Lean Startup approach championed by Eric Ries.

Python takes fifth place on Indeed’s list. Like Java, it’s a general-purpose programming language. Dutch programmer Guido van Rossum started building the language in 1989. According to python.org, “He needed a name that was short, unique, and slightly mysterious.” He had been watching the BBC comedy series “Monty Python’s Flying Circus” at the time, so he called the language Python. These days, it has a wide range of applications, “from testing microchips at Intel, to powering Instagram, to building video games,” according to online learning platform Treehouse. Python is an especially popular tool among data scientists.

In a separate analysis, Indeed economist Daniel Culbertson also looked at the tech skills seeing the most growth in demand. He compared Indeed search data from 2017 with 2016 and found that React saw a 229% jump in employer interest (measured by the words employers searched in Indeed’s resume database). React is a programming library based on JavaScript. It’s used to build user interfaces, and Facebook helps maintain it, according to Culbertson’s blog post. Indeed also found a surge in employer interest in cloud computing platforms, specifically Amazon Web Services and Microsoft Azure.

Percentages represent the number of times that each tech skill appears in job descriptions for tech positions.

We enjoyed a fun-filled afternoon watching the Twins beat the Orioles, 5-3!

We’re excited to announce our inclusion in the Minneapolis / St. Paul Business Journal’s Top Executive Search Firm List!  Our determination to assist our clients in hiring the best IT candidates has enabled True Source to earn its position in this list.  We value our client relationships and look forward to partnering with them for many years to come.

If you have not had the pleasure yet of meeting True Source IT employees, there may be a gap in your life that needs to be filled.  These people are amazing!  As a team of caring community members, True Source employees have recently taken care of spring cleaning the DAP grounds.  Not just picking up trash mind you – but fixing cement stairs, gardening, lawn work and more.

This is in addition to work they have done for DAP in the past, such as removing carpet, spring cleaning and attending DAP’s annual fall luncheon.

Led by President Brad Arthur, this team exemplifies the value of community and inspires us all.  THANK YOU TRUE SOURCE!!

Last night we had the pleasure of volunteering at Feed My Starving Children! We love supporting this charitable organization that strives to change the world, one child at a time. The Manna Packs that we prepared will feed 55 children for a whole year! That’s a lot of meals – 19,872 to be exact!